The Change of Experience

Travel is a peculiar thing in that it can have such vastly different implications for different people. In some instances, vastly different implications for the same person: I used to dream of road trips, “taking it easy” (like The Eagles but not listening The Eagles), getting away from work…I used to think of traveling as temporary, as a fix of sorts, a time when life stopped and all became fleeting, blissful, and indulgent…a time for spending hard-earned cash for anything my heart desired: vulgar t-shirts, lobster dinners, air-conditioned accommodation.

This November my wife Emma and I set off on our longest sojourn ever, months of salary-free living, on-the-go, moving and shaking. We’ve dedicated ourselves, and much of our savings, to traveling with no known end date on a route from Guatemala to Patagonia, over to French countryside for the summer, and who knows beyond that. We are largely budgeted, to say the least, hoping to stretch a few thousand dollars into about a dozen countries, three continents, two hemispheres, and one grand adventure.

Of course, this denomination of travel requires a different approach than lazing poolside with umbrella drinks, something much more depraved than jet-lag and puddle-hopping. In fact, we’ve vowed to keep our partying in check, to do without when possible (eating cold beans, using chicken buses, foregoing a fifteen year habit of a few beers and cigarettes in the evening), and to make the most of our money in a slow burn as opposed to a big bang. A major component of this financial underachieving is “working” and volunteering our way along. 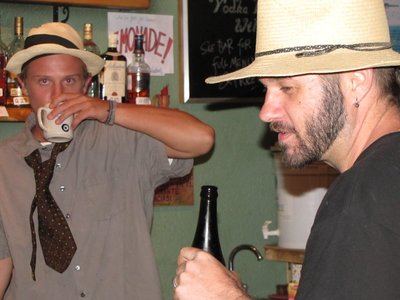 An island—Ometepe—in the middle of Lake Nicaragua is our first big stop (We did visit Leon and Grenada en route), and we are working at a little eco-lodge, tending to an organic farm so that we can live on four dollars a day. The island is that tropical jungle paradise everyone searches for—two volcanoes, beaches, lush greenery, skin-baking sunshine…There is cheap beer…There are monkeys, exotic birds, and, in the lake, a very unique bull shark thought until recently to only live here…and there are places catering to tourists but not so many that it feels Americanized, inauthentic, or any of those other nasty words used by some to describe great locations other travelers have also discovered.

In a rather Swiss Family Robinson manner, Emma and I are sleeping in a little loft above a dirt-floor kitchen/communal area with wooden tables, hammocks, a suspended bench, an inventive wood-burning stove we double as a smoker, and an oddly thorough collection of reading material left by those before us. For luxuries, we’ve got a couple of lights for the nighttime, an iPod speaker set-up, a gas range, a pizza oven off to the left (just a couple of hours of hard labor to get the fire going), and access to swank facilities—WiFi, an Infinity pool, stunning views—at the hotel, Totoco Ecolodge, attached to the farm.

For the most part, it’s a rustic return (or introduction in many cases) to simplicity, where there is water, coffee, or tea to drink, an ice chest for a refrigerator (a man comes to switch out old Coke bottle filled with frozen water to keep things cool), a garden in which we pick at least a portion of the ingredients to every meal we prepare. Our loft lacks walls, our bed sheets don’t fit, and our clothes are washed by hand and never quite dry in the musty jungle air. Using the toilet, a composting jobbie, involves a funnel and sawdust. In return, we “work” (mill around doing daily chores) from 7:00-12:00. The afternoons are to us.

Here’s the weird thing: There is more inclination is to stay down at the farm. The ecolodge is beautiful, with a crisp view of Volcan Concepcion and panoramas of the lake (the farm is too low on the mountain for this)…the pool is empty of people most of the time…Beer is $1.50…the WiFi sometimes works well enough…the wind blows a more refreshing breeze…the massive restaurant/bar/lounge rarely has more than a few people and always has empty couches with cushions. Still, for us, rising up from the jungle, from those patches of greenery and greens on-the-ready, it’s as if stepping out of Eden and into reality. 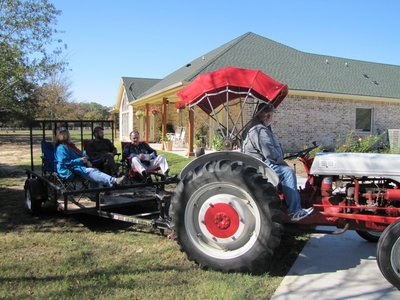 The appeal to what we are doing, to this experience, is the sacrifice, that ability to give things up and make life work. We are gaining a wider adventure, a selective taste of the luxury ecolodge life but something much more in the gut, a testing of the self through moments of discovery—what a plot of homegrown pineapples looks like as you clear it of weeds, the way a howler monkey sounds outside your open-air bedroom at 4:30 in the morning, how ginger grows well in the shade and the way it tastes fresh out of the ground into your curried rice, the process of making your own chocolate when you want a bar—moments of discovery that resonate only by being actively involved.

Once, I believed travel was about turning off. Now, it’s become something more engaging and less about disengaging. As I type these final words, I can feel the slight ache in my hands from digging all morning, the scratches on my wrists from an accidental scrape with chicken wire, and the weariness of my shoulders having lifted heavy posts time and again. I’m living here. Living literally but also figuratively, that type of “living” where the world is full of experiences and the opportunities are being taken to get them.

Simply said, this particular traveler doesn’t want to relax, doesn’t want to shake off a hangover for the first half of the day, but rather wants know what it’s like to carve out a life in the Nicaraguan rain forest on an island formed by two volcanoes. I can do that other shit anywhere.

(I apologize for the dated photos, but we are dealing with limited uploading abilities here. Think of the odd selection of accompanying visuals as a game: Can you figure out why I chose these photos to go with this particular entry? Leave a comment if you think you know.)

Nice blog. I think you picked me becauseim just that sexy.