Ming is 21 years old as of today, a university student obsessed with her lacrosse team, an admitted addict of Facebook (the self-proclaimed average of five hours a day), and a practitioner one of the longest and/or most frequent grooming-mosquito lotion regiments I’ve ever been witness to. She loves—and I’ve not met anyone other than my oldest brother who shares this trait—modern country music. She has a propensity for bending nails, recently learned to use a saw, and somehow was put in charge of continuing the instigation of an aquaponics system, a complex method of farming that involves fish poop and growing plants in gravel, a method with which she has no familiarity and has been known to comprise entire dissertations of specialist PhD candidates.

Ming is from a Bay Area suburb, smiles often and willingly, and recently had trouble scheduling the classes she needs next semester in order to graduate from UC Davis with a minor in communication. In order to fail in obtaining the schedule she wanted, she had to borrow our iPad, walk half a mile uphill to Totoco Ecolodge, and unsuccessfully connect to the internet before negotiating the use of Martijn’s (the owner’s) cell phone hotspot, only to find out the classes were full. Ming has come to Central America to work on organic farms for a couple of months. She has completely unplugged, such that her present electronics can be summed up as a digital wristwatch, which has made her the official timekeeper here. 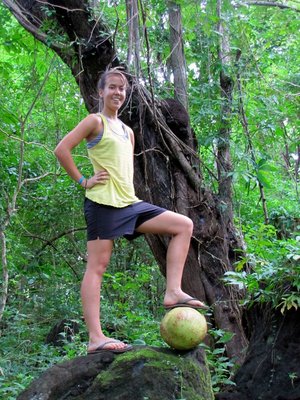 She has no iPod to entertain her on bus rides. No cell phone to Skype or IM with friends back home. No laptop to stay up-to-date with Facebook statuses or to email mom and dad about general well-being. No iPad for the odd movie or favorite TV show. No e-reader for a portable library of entertainment magazines or engaging literature or romance novels. The closest thing she has to any of this is a notebook she passes around: People are to write the most important life lesson they’ve learned in the last year. In my own way, this will be my contribution, the life lesson I would offer her to take from my last year, more so my last week:

There are several reasons (For the sake of brevity, I’ll list only three) Ming is not the type of person I’d normally chat to in a hostel and I’ll list several reasons (let’s say…around three) those reasons are idiotic. It takes but a very superficial bout of self-exploration to find my folly in making new friendships. However, for the sake of something, some form of guidance, to proffer this young sponge of a lady, I’ve put myself through the tedious task of self-examination in search of reasons why I might not talk to Ming were we not stuck together on a nightly basis in a dirt floor kitchen with howler monkeys screaming from the trees and ducks waddling passed our feet. Maybe these are explanations I needed as well, a catalyst to move me on to bigger and better life expectations, to more friendly interactions with others:

1. Though Ming is young, like college young, and for some reason people that age now scare the bejesus out of me, not sure if it’s that I want to seem cool or don’t want to seem old or if I’m worried about them being too loud or not speaking loud enough, but I’d rather just steer clear, not risk it.

Idiotic because she should more likely be scared of someone like me: I’d be the weird guy with a small enough age gap and good enough looks (yes, I said that) to think I might be cool enough to pull something off. Luckily, my beautiful wife Emma serves well to dispel that concern right away or maybe she wouldn’t have bothered talking to me.

2. Though I made a triumphantly impressive return to the basketball court this year (the three shot is still working folks), my days of athletic abundance are over, and it’s readily apparent hers are not. I’m somewhat afraid that she could beat me in a foot race, and I’m still athletic enough to not like that.

Idiotic because you don’t have to run fast to shoot three-pointers effectively. As long as I kept her off the track and out of the low post and, I would still dominate her on the basketball court, where I’ve got the savvy cunning of veteran on my side and she doesn’t have a lacrosse stick to hit me with. 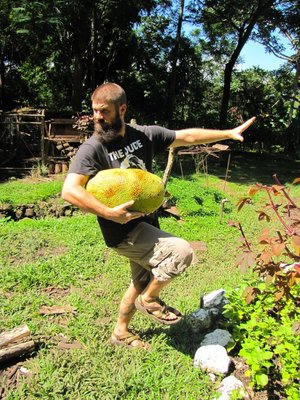 3. Though impressed with her shameless admission to rampant Facebook use (let’s say I overheard her tell someone this), I still like to claim I only do it for the purposes of being a travel writer. Due to peer judgment, I can never openly suggest it’s a pleasant experience for me or share in that joy with another.

Idiotic because 99% of the peers I know who might be ready to judge me over my affiliation with Facebook only have contact with through Facebook. As a writer, I’m a friend collector, and how foolish would I have to be to overlook one who’d be sharing my posts five hours a day.

Though I know better, have met many great people over the last decade that don’t exactly fit the mold of my typical friends—heavy drinkers, people in flannel shirts, and the slightly unkempt, in case you were wondering—in a push, another circumstance, I wouldn’t have met Ming, found out about her very impressively unplugged adventure or how she went about changing her feelings regarding an ex-boyfriend (a pretty fun story I won’t share so publicly). I wouldn’t have seen how keen she is to actually act on the beliefs she’s cultivating here at the farm and beyond. I would’ve continued growing sour in my opinions of “today’s youth”. That would’ve been a true loss for me.

So, my big lesson this year, or at least the one my remaining brain cells can grab most readily without straining too hard, is this: Give people a chance to surprise you and they often will. Truth be told, I met some great 20-year-olds just before I left Guatemala, but I can be pretty crabby, set in my ways, and settled in many of my beliefs, especially about traveling and age gaps. I’ve lost that thirst for the ideas of the people around me, not when I can read a book by an expert or have researched something to my own—I’d probably feel—better conclusions. At times, with regards to bonding with fellow travelers, particularly young ones, this robs me of one of the great experiences of the vagabonding culture I so dearly love: camaraderie. That’s a tragedy, one I’m hoping my new relationship with Ming will help me avoid in the future. 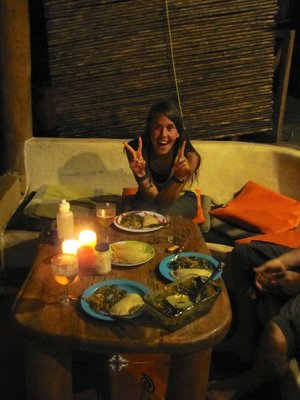 I never thought I’d be the one corrupting a 21-year-old’s detachment from WiFi and modern comforts, but I’ve downloaded country pop classics from 2012 for my new friend to listen to via my iPod on her birthday and I’m hoping we can watch a movie on my laptop a little later this week and I’ve blogged about her in hopes of getting away with not buying a present so that she can look at that online anytime she likes and share it with her Facebook friends. Seriously though, I hope this gift of camaraderie is a lesson that not only continues to linger with Ming but that sticks with me over the next few months as I make my way down to Patagonia. It’s a simple but important lesson that I seem to always need reminding of. People, by and large, are alright.

So, happy birthday, Ming. I’ll give you this one day to challenge me to a race. After that, I’m sticking to basketball, which I am well aware we do not have access to on this farm.