It wasn’t until returning to Earth Lodge in 2012 that the term super food meant more to me than a larger portion of something, such as “I’d like a #2 meal deal” to which the response is often “Would you like to super size that?” In this way, super foods had garnered a bit of reputation as something over-indulgent and worthy of scathing documentaries, so I steered clear. But, the Lodge had found a powder, a super powder of sorts, made from a plant called moringa, and it was moringa that changed my perception of super foods.

It—the powder, I’d still not seen the plant—was green, gave off a mild spinach-like flavor, and went into smoothies and soups to give them some added nutritional super power. Why, as it was told to me, a little teaspoon of moringa packed more iron than the Golden Gate Bridge, more vitamin C than a Flintstone daily, and…could it be?...is it even possible?...provided a healthy dose of muscle-building protein. From a plant! Hell, they—those mysterious powers of persuasion out there—were promoting this stuff as a possible fix to malnutrition. Not super-sizing.

Anyway, I was skeptical to say the least. In general, I’m not a fan of food that comes in powdered form. This mild hatred might be rooted in the days of old when, as a competitive weightlifter and football player, I would choke down awful “chocolate” flavored shakes with visions of Popeye-esque forearms. You see, after all those drinks, my forearms remained pretty average, so these days I simply don’t trust powders. Also, and this is more the person I am now, but if something is so awesome, why can’t I just eat it like normal food?

Eventually, though, with the bottle, hang around in the kitchen winking at me every time I was doing a little strawberry-banana combo licuado or heating up a bowl of soup, I started adding it to stuff. You know what, my forearms stayed exactly the same. 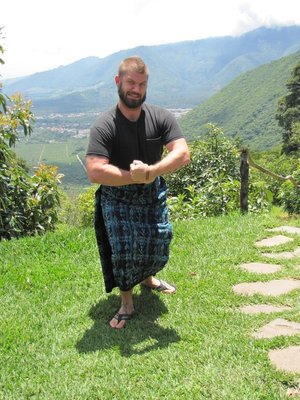 Flash forward a year or more and I’m sitting in a hotel-restaurant in Monterrico, Guatemala, reading a book I’ve just found on the book exchange: Eating Animals. About 20 pages in, I realize some pretty major changes are about to happen to my daily intake. I’m waving a big bye-bye to my fruit, yogurt, and granola breakfasts, and there will be no more egg sandwiches or grilled cheeses, no more café au laits or anything resembling ice cream (my favorite food). Factory farming, including dairy cows and hen houses, is destroying the environment far more than the oil industry, transportation, or light bulbs that aren't energy efficient, and I just can’t conscientiously be part of that.

The sacrificing of regular dairy and egg consumption, I know, will cause a stir amongst those loosely concerned with what I eat. After nearly a decade of being a vegetarian, I’ve addressed confounded family members and complete strangers time and again about where I get my protein. I mean, God knows, at 5’9” and teetering between 180 and 200 pounds (depending more on beer intake than diet), I’m suffering. Nonetheless, by going somewhat vegan (I’ll eat dairy or eggs not from factory farms, something normally not at all available to me), I’ve just thrown away the one bit of protein I had that modern first-world eaters understand.

Truth be confessed, it’s gotten to me, too. Every day, I’m studying my meals, planning where the protein is coming from, worrying about vitamin B12, which I’ve never worried about before and am largely uncertain as to what it does. I’m reading articles by vegan athletes to reassure myself that I will lose none of the muscular chisel I've grown accustomed to (especially throughout the forearm area), that I can indeed continue along with my well-developed physical prowess. All of this is to say, I’ve ended up right back where this article started: super foods. 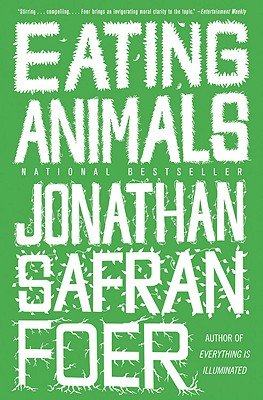 When we arrived at Totoco Organic Farm a few weeks back, I was excited to find out one of the major crops here was chaya. Yes, chaya. What? You’ve not heard of chaya! Oh, well, chaya has super powers, nutrient boosters, that easily rival that of moringa, that other household byword. Chaya, aka “the spinach tree”, is yet another super food. I first learned about it from a guy I was talking to about his moringa farm, and this guy told me chaya and another vitamin hero, chia, were going to end up blowing the freaking dust off moringa.

Beans, nuts, the occasional soy something or other...I know soy is evil, but give me a break, you corn-eaters. I’m scratching out my servings of protein here...beans, nuts, SOY—they’ve been getting it done for me, keeping the protein police at bay, but no one is going to argue with a super food. Super foods are known to simple laugh in face of doubters, to demean pound-for-pound servings of fish, steak, and even mussels. My friend, you do not want to forget your culinary manners when you are in the kitchen with some chaya.

Which brings me to my next point: There is one little problem. In addition to high levels of good stuff, chaya does contain a smidgen of cyanide. Yes, that’s just outright poison, not even the figurative cholesterol-type “poison” of shellfish or egg yolks. I looked up how to cook chaya (this website is awesome), and I won’t lie, it wasn’t the most comforting info. Edible, yes. Crazy nutritious, yes. Slightly lethal, oops. In order to eat chaya safely, it must boiled for twenty minutes or fried (Note: stir-frying is not sufficient). And, never ever—treat this like feeding a mogwai (the cute little pre-gremlin) after midnight—cook chaya in an aluminum container. I’m not sure what happens, but it’s bad.

Follow those rules and you’re fine. The cyanide becomes something all together different and 100% safe. Still, how in the hell am I supposed to explain that to my chicken-fried pork chop-eating friends? If they didn’t get the vegetarian/factory farming boycott thing, I doubt chaya will soon feature on their dinner tables. 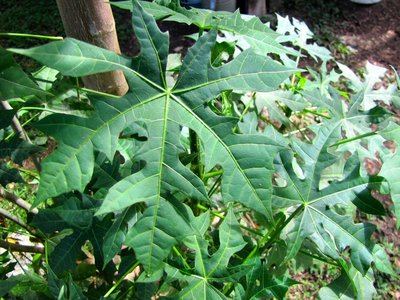 Chaya! In the Flesh. (Warning: Mild Poisoning May Occur)

But, it did on mine. It took me a couple of weeks of staring the plant down before I gave it a go. Hmm…tastes like spinach (that’s the vegan version of “tastes like chicken”). I’ve eaten it a few times now, and I’m still kicking, though there have been some close calls, getting halfway through preparing a meal before realizing I don’t know what the pot is made of. Dodging flying oil when the succulent leaves are lowered into my little cast iron fryer. 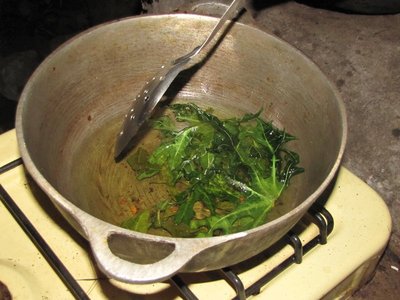 Fried Chaya. It Did Not Taste Healthy.

Hey, we all choose our poisons. Some more literally than others. I used to super-size stuff to go along with my double-stacked burgers, extra pickles for some veggies. I once was known to play a little red meat roulette and tempt cardiovascular collapse, my swollen body throwing me to the floor and reaching for my heart. It never happened despite being some 50-60 pounds heavier than I am now. So, I’ve gone vegan-like in my existence, and now I scraped the plate with a little cyanide kicker. Life is better lived on the edge, my amigos, and hey, vegans can be badass, too.

Just as a little aside, a last thought for those less risky than I. On our orientation tour of Totoco, Emma and I were shown katuk, a local plant with leaves that work well in salads. Katuk has a rich nutty taste that is charming right off the branch. A couple of days after we began risking our lives with chaya (Note: the others completely followed me into chaya-eating. That’s it, my pretties, drink the Kool Aid)…after we tried chaya, Emma looked up katuk online. You’d never have guessed it: super food.

Katuk, not uncommon in the USA, is like 50% protein, brings a katuk-load of vitamin K (whatever the hell that is), and is renowned amongst the super foods (and Asian people) for just being simple and delicious to eat. Having survived this long, I’ve grown a need for a little more excitement in my life, so between katuk and my continued ingestion of chaya, I’m getting a double dose of protein-packed greenery now. Admittedly, the forearms have done little in the way of bulging. 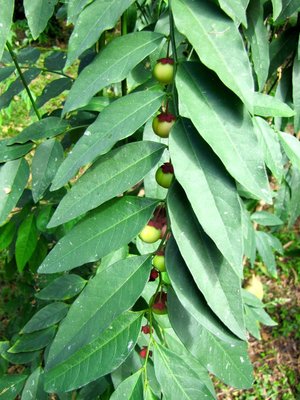 Katuk, aka (and equally exotic) The Star Gooseberry