Imagine, if you will, a world in which shit is a hot commodity, both literally and figuratively. Over there, under the jackfruit tree, there’s a big pile of imported horse turds. A few yards away, in an upturned truck-bed camper, a whole mess of pig crap—still moist—is just stewing in itself. And, what’s that behind the outhouse, just soaking up the breeze? Could it be? A massive mound of decomposed human feces, completely fling-able but not recommended.

Let’s up the ante a bit. Let’s talk garbage. If poop is profitable, why not garbage? (Incidentally, check out this article on how profitable garbage can actually be. But, first…) Let’s pile it up into heaps. Spotted melon rinds, onion skin, moldy bread, egg shells, crusty leftover—Sounds like a dandy combination, the Grinch's fantasy com true. Hell, sprinkle that with a little grass clippings, some tree trimmings, and let it rot for a year or so. Rich doesn’t even begin to describe the results.

Until about a month ago, composting was still a pretty big mystery to me. It had always seemed a never-ending pile of organic junk. I would donate my vegetable scraps to one. I would responsibly separate my garbage into neat little categories of waste, but I only half-heartedly believed my old banana peels would ever get anyone anywhere. Composting just seemed like one of those good ideas no one ever saw to the end. And, as for manure, I’d sunk my hands (and shoes) into the animal variety a time or two, but my own…that seemed a bit over the top.

But, as has been the status quo for the end of this year, the times and my opinions are a-changing. Over the last couple of weeks, I’ve devoted some serious time and labor to the aid of harnessing the value of both shit and garbage. I’ve learned quite a lot about them, and I’ll be damned if these infamously smelly things don’t have me seeing roses. 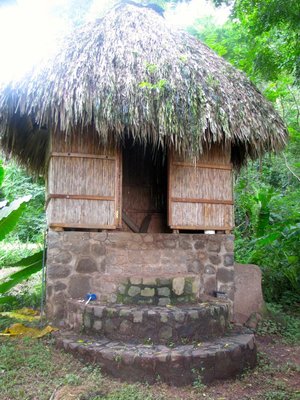 Your Are Entering the Thunderbox!

Composting Toilets: Saving My Doo-Doo & My Friends Doo-Doo, Too

I know, I know. This is beyond strange. We spend a lifetime sanitizing ourselves, and now, in some circles in the weedy parts of town, it’s become fashionable to collect our own excrement. Even the excrement of others. But, there are reasons why, methods for doing so somewhat sanely, and benefits to be had from it.

Why? Flush toilets, the modern norm, are a bit a wasteful and pollutant, also the modern norm. When the contents get whisked away by—let’s be generous—your econo/enviro-tank, it often ends up really fouling up a pool of water somewhere, possibly on an eventual trip back into your water glass. In the same flush, a whole buttload (keeping the puns coming!) of nutrient rich soil steroids gets washed away. Simply put, however you feel about this shit, a dry toilet is better for the environment, as good as any energy efficient light bulb on the market.

How exactly does one save it? Several methods exist, including fairly normal-looking composting toilets for fairly normal houses. The classic poop catcher, as found on Totoco Farm and many farms like it, is called—awesomely—the Thunderbox. It’s an elevated room with two chambers below it and two matching holes in the floor. One is sealed with something similar to a manhole cover, and the other has a drop-toilet over it. 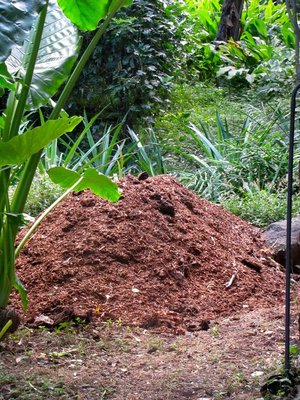 A Old Pile of Poop from Our Totocoan Predecessors

In the Thunderbox, your morning confessionals should be covered with sawdust or hay and intermingled with unprocessed kitchen and garden waste. When the hole fills, switch sides, and when it’s time to switch again, shovel the rich compost out of the first one*. Any likeness to the initial dump is long since decomposed and unrecognizable. It doesn’t even stink. What’s more, you can spread it around at the base of trees to give them a little growth spurt.

Other Human Waste to Celebrate:

Amongst our other duties here at Totoco, we took on refurbishing the composting system, which resembled the pile of ever-expanding organic junk I’d grown accustomed to. The concept was right, with a set up like a Thunderbox, one chamber in action while the other “rests”. I know this because I’ve been reading gardening and sustainability manuals, especially John Seymour’s The New Complete Book of Self-Sufficiency: The Classic Guide for Realists and Dreamers, which tell me so.

The problem was that the compost bins here were too big to allow the compost to rest. We were years away from filling one up. The ideal compost bin is a square yard (or meter), so we decided to divide the two existing bins into four, which worked out just about right. The next problem we ran into is that, when divided into four, we only had enough existing compost to fill one. The solution: Hot compost. Hot compost is not just a willy-nilly pile of organic mishmash slowly decomposing matter. No sir, the heaps are furnaces of fury. 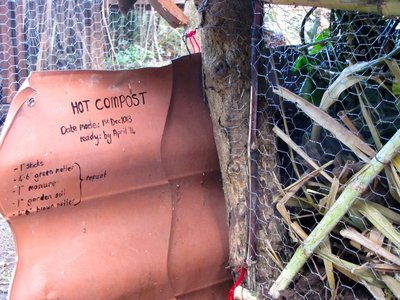 Carefully stacked so that the contents get plenty of oxygen exposure and exponentially speed up the process, hot heap decomposition actually gets so active that one cabin—the one with the most consistent hot water—at the ecolodge gets hot water from coils of hose buried in a hot heap. Every two or three months, the heap is turned, and every five or six, it’s cleared and made again. Two of our four bins we made became hot heaps: sticks (2”), green matter like weeds and fresh leaves (4” to 6”), an inch of manure, an inch of top soil, and brown matter like dried leaves or straw (4” to 6”). Just repeat the layering until it’s full. To make a water heater, you need only coil a ½” or ¾” hose between the stacks.

And a Pile of Cold Kitchen Scraps

So, we were left with two cold bins. Cold heaps are any assemblence of organic matter: kitchen scraps, weeds, sticks, and so on (no meat or dairy). One of them, I was able to fill from what had been collected already, and the other sat empty and inviting for the new pile to begin, just like Emma’s empty Thunderbox chamber. A cold heap takes twice the time to decompose, roughly one year of resting to be ready, but can be thrown together any old way. The idea again is to rotate the bins in such a way that one’s used for fertile soil while the other is used for waste.

I found this all fascinating and exceedingly applicable for anyone with a little space, a garden, and an interest in doing good things for the earth. Composting food scraps—vegetable ends, fruit rinds, peels, and so on—cut our weekly trash more than in half (we are vegetarians) when we lived in Antigua, not to mention more than halved our use of plastic trash bags. Now, we produce even less waste, and that is a tremendous feeling, one made possible by composting both before and after digestion. 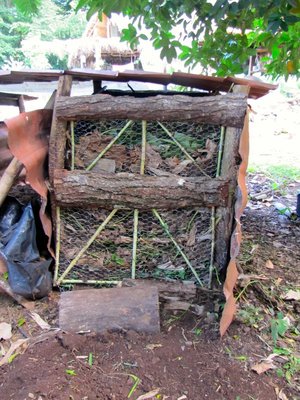 A Manageable Cube of Compost

Sure, we traveled to Nicaragua to have this be part of our life, but it could be, in some capacity, anywhere we are. Urban composting is in no way out of the question (there are special bins available and rooftop gardening is a thing now), or in the suburbs with a quarter-acre yard—come on! Or in a fishing camp, dacha, or country hideaway. After setting it up, it’s no more work than emptying a garbage can, which we have to do anyway. Hell, even if we don’t have a garden, I’m sure someone will gladly use it in theirs.

So, actually, maybe it’s not all that complex, is it? Hell, maybe even friends, family, and other readers who made it this far could do it, too—ha! Got you. Seriously though, not a bad New Year’s resolution project.