Last month, Emma and I took a tiny bus out of Bogota, changed to another tiny bus at a place called La Playa (it was not a beach but rather a convenience store just before a highway turnoff), and got off at a lakeside restaurant, Los Pinos (“the pines”). From there, our directions were to “go back twenty meters and take the dirt road on the right.” It was the first farm we’d come to: La Juanita Finca Verde, a few kilometers outside the town of Guatavita, which most Colombians I’d talked to hadn’t heard of.

With a tiny hand-painted sign hanging on the fence, it did not look like a center for international exchange but rather the abode of a reclusive green-thumb, off-the-grid and content to stay there. But, Felipe is nothing of the sort, and La Juanita was a surprisingly bustling center of cultural exchange. There were so many things I fell for almost instantly: 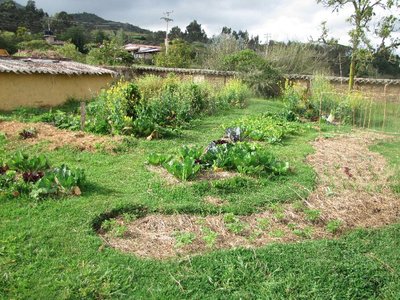 La Juanita is what I imagine farms of the future to be like (and maybe what the farms of the past were). It’s a small holding, about four acres, with a humble but comfortable country house in the center. The gardens sort of grow out of the lawn, a thick carpet of grass suddenly giving way to a mishmash of produce that, at once, seems as abundant as anything I’ve ever seen and also somewhat untended. The plants spiral around on mounds of dirt, half of the vegetation left to flower. The beds are covered in dense blankets of straw that, when pushed back, usually reveals tufts of salad leaves. There are greenhouses stuffed with plant-life. Permaculture.

Not to mention there is a super cool biodome, as well as another greenhouse made from an building, complete with a garden bathroom. 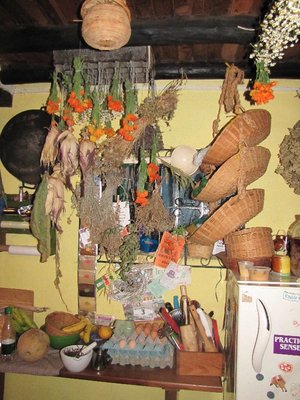 The kitchen looks like something from J.K. Rowling’s imagination. Plants festoon the rafters: Tobacco drying here, ears of corn hanging, an entire aloe vera plant suspended, tiny bunches of flowers turned upside down and bound with string, edible potions cluttering every shelf, a spread of vegetables and bowls of beans on the table. A keg of home-brewed beer sits next to the fridge. Giant jars of kombucha ferment in the darkened corners next to an eclectic collection of rudimentary tools: a grinder, dinged-up canteens, a big brass dinner bell, and an array of baskets. 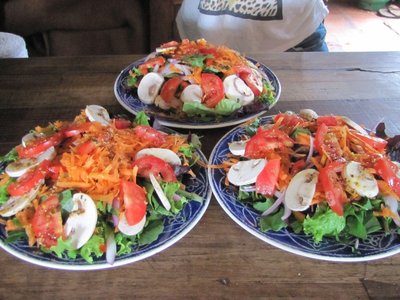 Something rings so true about walking out in the backyard and grabbing the fixings for your salad. Fresh, nutritious, and flavorful—we ate from the garden everyday, often every meal. Besides that, there was always a massive bounty of local produce: pumpkins, peas, squashes, and beans. Quinoa is native to this area of Colombia and no stranger to La Juanita pots. A numerous collection of herbs are steeped for interesting teas.

Then, there was the “evil bean”. On Emma’s and my first cooking showcase, we took a bit of what appeared to be your garden-variety white bean. It was not. Bitter as an old man in a dirty diaper, it ruined a pot of otherwise delicious legumes. We tried to salvage it. We change the water—bitter. We hand-plucked all of the offending beans—bitter. We attempted rinsing and rinsing—bitter. Covering with spices—nope. We even tried smushing it into burgers. Eventually, the whole bean stew was composted, and I whipped up some curried lentils. 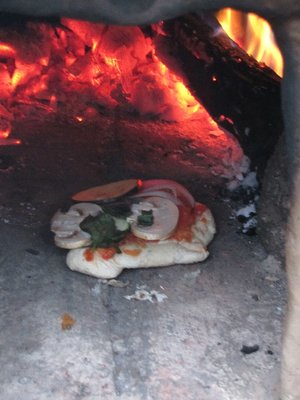 Another great food-themed delight was the pizza/bread oven. Built from cob (I’ll be doing one of these soon myself), Felipe, Emma, and I teamed up to provide the final touches: a door, a clay doorjamb, and stopper for the chimney. Then, we got to cook in it. The first pizzas came on our anniversary, a tradition, and though cheeseless, they were pretty rocking. We made lots of herb breads in it and had a beer-riddled pizza party one Sunday evening. I’m fairly certain every outdoors-y place should have one of these. 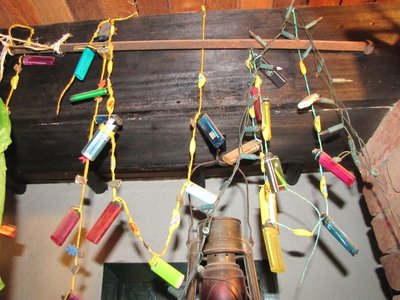 In addition to composting everything, a lot via a super cool worm farm, trash at La Juanita has various avenues. There is a plan for glass bottles to be incorporated into outdoor shower walls. Plastic bottles, which rarely make it on site, are filled with plastic wrappers to create bottle bricks for later construction projects. Of course, all plant trimmings and grass clippings are fed back to the earth. Even the low amount of energy used is conserved by only turning on the water heater when a shower is up-coming. All in all, in a month there, with at least three people (up to about seven) staying there, we probably produce one normal trash bag of waste. And, La Juanita is a B&B with paying guests. I like that the lack of waste is so significant as to garner praise. 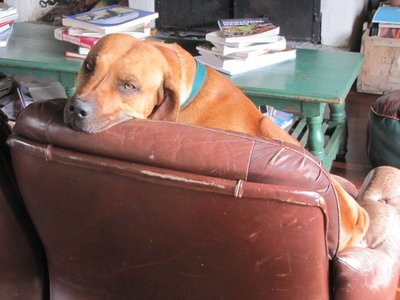 There are two permanent canine residents at La Juanita, the reserved and nap-happy Camaneche (No one knows what the name means. He arrived with it.) and a snappy puppy, Rebeka, who has super soft fur, a voracious appetite, and a quick trigger on the old bark. Additionally, we had two guests/former residents, Baruk and Chepe. They are gigantic Rhodesian Ridgebacks, bred to be built like female lions, yet these two were gentle as ever and more or less occupied two armchairs for a week and a half. Then, there was black dog and little black dog, two impossibly excited specimens that would appear every few days from out of nowhere. It was a great place to get a little puppy love. 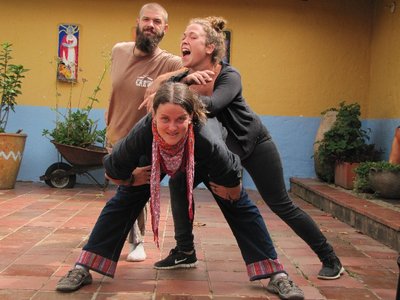 For a house, you might be convinced it’s a coffee shop. La Juanita has ever-revolving slew of guests in an out, old friends stopping through, and neighbors popping up for dinner (something that’s not always wonderful when you’ve just about finished cooking). Nevertheless, it has that feeling of youth and energy associated with university life but also manages to be occupied by adults with a little more sense, which makes for a high stimulate, intellectual environment where you learn cool stuff inadvertently. Plus, you make a lot of friends, and when you are for sure heading back Colombia… 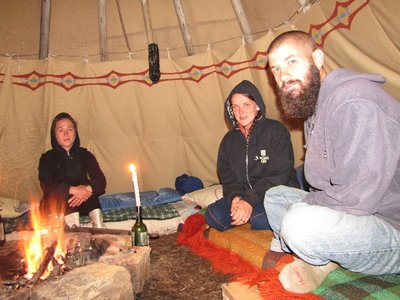 Yes, a tipi (or teepee) is an odd fixture to find in Colombia, but Felipe had it shipped down from Oregon and set it up on a great plateau in the property. We got to take the whole thing down and put it back up, which was an interesting and knuckle-busting (for some of us—me) process. Chaja (our new Dutch counterpart and fellow volunteer), Emma, and I stayed in the tipi for nearly the entire last week we were there. Every night, we’d stock up a fire in the center of it and share hot tea from a thermos or a bottle wine. What can one say about sleeping in a tipi—It’s awesome. 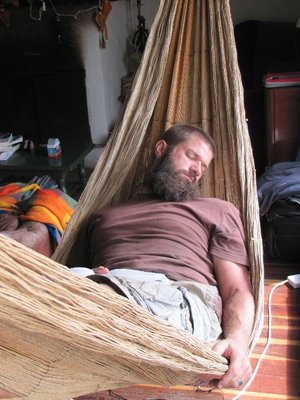 The coffee table in the living room La Juanita is scattered with fantastically interesting reading material, covering such topics as do-it-yourself plumbing to permaculture to medicinal herbs. Emma and I simply sawed through books in a first couple of weeks, soaking up all we could before moving on to another handy topic to bring back to Panama with us: How to ferment our own pickles and pineapple wine, how to build keyhole permaculture beds, which herbs to grow for a beautiful and beneficial garden, and on it went. Probably the thing we most took from the library was the need to have a worthwhile library wherever we end up. 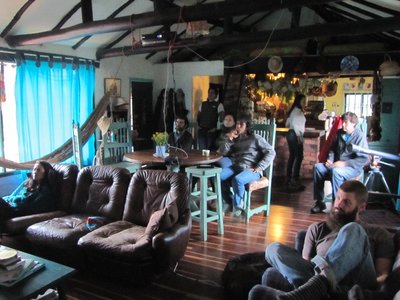 TEDx are unofficial Ted Talks that are broadcasted all over the world in live events. Felipe uses La Juanita as one of the satellites that host the events. We had a fantastic time the TEDx Manhattan event, which was all about “Changing the Way We Eat”. The event included a pot-luck lunch, fantastic lectures, and a very multi-cultural congregation of people getting together to both have a great time and simultaneously engage in something important. I’ve resisted TED stuff for a long time now, but La Juanita managed to convert me with one easy Sunday afternoon. 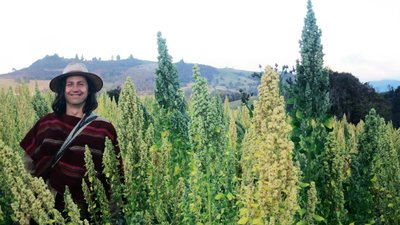 Let me not skip over Felipe, a most gracious host and enthusiastic entertainer. The first time we saw him we’d been at the farm for two days already, and he appeared through the morning mist at about six a.m. He’d let us into his house without having met us. In the weeks to come, he let us more or less take over the kitchen. And, throughout our time, he shared loads of experience-rich information. He introduced us to a fantastic fleet of friends, encouraged us to meddle in his garden, and included us in all aspects of the goings-on of La Juanita Finca Verde. He became a friend, a person to come back to visit (even invited us to do so anytime), and an inspiration for how to soon begin our own permaculture projects with community outreach programs. I feel privileged, truly.