One Week of Volunteering in an Ecuadorian Cloud Forest

We’d gauged the time a little loosely and arrived at the bus station, Ofelia, in the north end of Quito, with less than ten minutes to find our bus to Las Tolas. The stakes were high because, unlike other places, buses for Las Tolas leave once a day at 5:30 pm (they depart Las Tolas once a day as well, at 6:30 am) We asked the turnstile attendant, who pointed us towards a waiting line of coaches, with probably five-plus minutes to spare.

However, our problems were not over. Standing on the sidewalk, I stared back and forth from the placards in the buses’ front windows to the scribbled directions—on the back of a supermarket receipt—in my hand. We were supposed to take the Las Minas bus until its last stop: Las Tolas. To my left was a bus with a “Minas” placard. To my right was a bus with a “Las Tolas” placard. Neither Emma nor I knew what to make of it all.

With time short and a-wasting, we opted for Las Tolas. Sitting in the bus, we discussed in strained whispers whether we’d made the right choice. Then, at the last minute, we leapt off, deciding the “Minas” bus was better. Then, thirty seconds later, after grilling the bus attendant and driver, we boarded the Las Tolas bus again, watching the “Minas” bus disappear. There was no turning back.

When you … when one … when we hop a bus to a distant (two and a half hours) rural village in the cloud forests of Ecuador, not knowing where exactly our “last stop” is going to leave us, or with whom, it’s hard to not spend the next two and a half hours worrying, especially when paved road gives way to bumpy gravel—let’s call them—bus/wagon trails that the massive coach is cornering about plunging cliffs in the dark. 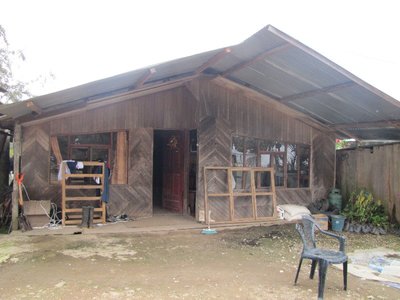 At the penultimate stop, a lady came up and asked us if we were going to Las Tolas. She was Cecilia, the matron of the family we were traveling to meet. Emma and I looked at each other, exhaled into smiles, and finally unclenched our tightened gluts. Later, we admitted we both been playing out what-if scenarios in our heads, mine involving pitching our tent alongside the road, hers being taken by some kind local.

Whatever the case, it was official: We were headed in the right direction. Thank Dios.

Cultural Connect[: We were later informed that the name of the bus company we used was “Las Minas” and that the instruction meant to take the Las Minas company bus to Las Tolas. No one seemed to know there was, in fact, a town called Minas. Another end of the line country town, likely as remote and small Las Tolas, it’s no wonder they had no idea that the neighboring bus would have caused so much confusion.

Forget How to Get There. Why Were We on that Bus?

For those who have not happened upon the website of a tiny NGO affiliated with the village of Las Tolas, there is little to no reason to have heard of the place. Truthfully, as we’ve established, it is at the end of a bus ride to the middle of nowhere in the mountains of northern Ecuador. There is no sea nearby, no hot springs or markets. There are no hotels, only one tiny restaurant, and neither WiFi. nor ATMs to be found. However, I’d been really looking forward to seeing the place.

For most who follow this blog, or the Jonathon Engels travel train in general, you are aware that about six months ago I launched a website called The NGO List. On this website, an NGO is featured each month. In the beginning, I wrote these features but have since been encouraging NGO affiliates to write their own accounts of organizations. In early March, just about a month before my first trip to Ecuador, a representative submitted a profile of her experience of Las Tolas. 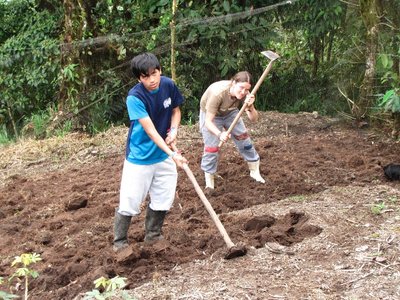 Within a week of reading it, I’d signed us—Emma did agree—up for a week—in fact, our last week of vacation*—of volunteering.

*Though the expat, long-term traveling life does seem a bit like a permanent vacation, we do get jobs quite regularly and often juggling fairly demanding positions. We just typically do it in really nice place, like our upcoming (15 April-15 Oct) lakeside caretaking gig in Arenosa, Panama. We’ll be transforming a beautiful property into a food jungle. And, we are accepting work-trade volunteers interested in helping.

Back to Las Tolas: When the bus finally stopped for good, Cecilia led us a little further into the darkness, along a road turned muddy from invierno (literally translated as winter, equatorially meaning rainy season). Her house—our house for the next week—was a small wooden abode, with a kitchen of the front and a bathroom out of the back, with living room devoid a furniture save a plastic patio chair facing a small TV, and with a husband (Edgar), two teenagers (Alexis and Pamela), and a Chihuahua (Cookie). Upon our arrival, Edgar was laboring over a pot of soup. We were shown to a private bedroom where we could unload our bags. It was good to be temporarily home.

Cultural Connect: As vegetarians before and now as vegans, Emma and I generally avoid homestays; however, we were assured it was no worry. Though slightly bewildered by the no dairy aspect (a lot of local income is from milking cows), Edgar and Cecilia understood well and quickly. Our diet and concern of what to feed us, nevertheless, became the talk of the town. By Friday, we witnessed the neighbors across the street escorting a pig to its death. The squeals were frantic but quick. As we walked down the street a little later, the corpse was in the yard, a man with a blowtorch burning the hair off it, strengthening our resolve all the better.

A Little Slice of Life Laboring in Las Tolas 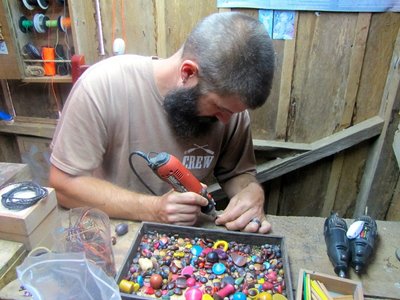 In Las Tolas, the mornings are a not unwelcomed cacophony of cockerels, fighting it out for territory. Each house seems to have a multitude of roosting boxes for the free-running fowl that chase each other in and out of the downward slopping backyards. Seeking morning bladder relief, it’s hard not to stop and look out over the clouds misting through the treetops as the sun burns off the veil of night…really dark night.

Breakfast was an interesting variation everyday. It usually consisted of Edgar and Cecilia running a little late for the bus (they work out of town), but they’d taken the time to prepare us something. The something was usually atypical breakfast food: mashed potatoes and salad or sautéed cabbage with peas and carrots. It was a sincerely endearing and much appreciated effort to feed us well, and honestly, Emma and I are seriously considering making breakfast with a wider range of ingredients in the future.

Cultural Connect: The funniest breakfast dish actually was a bit more traditional, for both cultures. In Ecuador, it’s common to prepare oatmeal as a thick breakfast drink, boiling it then filtering the oats out. It’s custom to ad a little citrus, cinnamon, and panela (a local sugar thing). When we asked what it was called, Cecilia told us Qua-care, pointing to a package on the shelf, a little man in a black and white suit on the front. We knew him as the Quaker man. There was no other name for the drink.

Daily task vary, from projects that seem solely for the travelers experience to laborious adventures in volunteering. They take place in the mornings, organized somewhat loosely the night before and rearranged by the time they get underway.

• Day one found us filling about 400 bags with soil—beautiful, rich soil with a fine mix of organic matter—to aid a reforestation project. The community’s main source of income used to be wood. Now, through the community is working to plant trees to connect to sections of jungle that were separated. While working, we had rousing games of memory and taboo, in Spanish, with our local little sister, Pamela, and the other volunteers.
• On day two, Emma and I hopped in the back of a milk truck with massive metal storage tanks rattling and tilting all around us. We arrive some thirty minutes outside of town to Luis, our boss for the day, milking Frisian cows along the roadside. Later, he leads us into the jungle to work on some trails his making in hopes of guiding tours for bird-watchers. Las Tolas is in a cloud forest well-stocked with notable birds, including quetzals.
• Day three, we spent the morning at an event at a nearby village, a joint effort of all the surrounding pueblos to come together. To our delight, the culminating activity was a contest to see who made the best outfit from trash. In the afternoon, we got work with a local artisan who collects, processes (milling, coloring, polishing, etc) her own seeds for beads. We made our moms souvenirs.
• On Saturday morning, we followed Edgar, the paterfamilias, down to the community vegetable patch where we—Edgar, the children, Emma, and I—tilled up a steep hillside of earth, sorting through seeds and ultimately planting a row of potatoes and a bed of mixed salad vegetables. When we asked about who would get to eat it all, we learned the garden was to feed future volunteers. 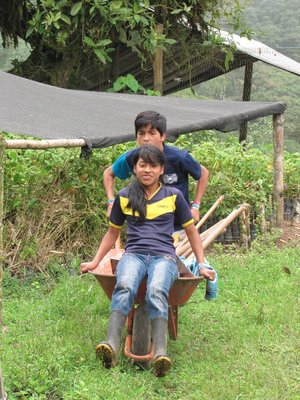 Cultural Connect: For some reason, I always imagine the life of a Latin American campesino to be one of endless toil and struggle, a no rest for the weary existence, but on Saturday afternoon, Edgar set of to play an extremely odd game called National Ball with a regular group of friends. That night, our last, we shared a couple of beers with Cecilia. Edgar came home a little loopy from after-game festivities and delighted in the fact that we could all sleep in the next day—until 8:00. We woke up to plantain empanadas for breakfast.

Facebook gets a bad rap, and I have to say it is probably sometimes deserved. Friendships have become a little more passé, reduced to status updates and Likes of encouragement. However, as a traveler, the site has been an amazing bridge for maintaining passé friendships that would otherwise likely dwindle away. I’d heard Facebook mentioned around town a few times in our week at Las Tolas.

As we waited for the bus—keep in mind, there is only one a day to keep the town connected to the world—Cecilia gave us a card thanking us for visiting. She included her Facebook contact. And, on the bus, on his way to some other tiny town nearby, Luis sat across the aisle, finally inquiring: “Tiene Facebook?” And, I guess that’s how life is rural Ecuador these days: Physically cut off but newly plugged in. 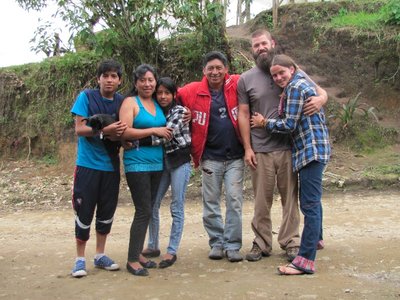 Awesome idea and you have represent it awesomely. I am really impressed with the quality of article. <a href="http://allexresults.blogspot.com">All Ex Results</a>