Ten or More Things from the Last Month on the Farm

Well, just yesterday, we hit three months of working on our project here in Arenosa, Panama. The property, just over two acres, is basically bisected by a sidewalk. The owners have given us free reign over one side and asked us to maintain the other as you would a normal yard. The difference is really beginning to show, and the project takes more and more shape each month. 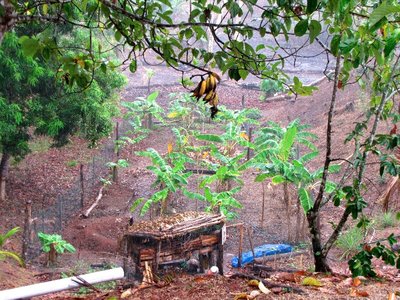 The idea with our side of the property is to basically fill every space that isn’t a path with something nourishing, either for us or for the earth. By no means are we there yet, but some of our labors are really starting to show in the soil, in the expanded garden space, and in our meals. We eat from the garden every day, and we add new plants, more mulch, and different systems every day as well. 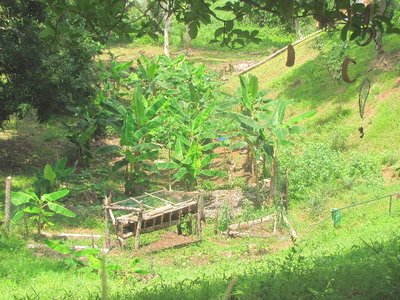 On the other side of the property, we toil at least a couple of days a week to keep the grass cut and weeds down. It looks like a nice yard, with trees here and there (some of them fruit-producing) and ornamental plants dotted around. It’s an incredible thing to see the difference and interesting experiment to see which is preferable (for the owners, who obviously like gardens but don’t necessarily garden themselves).

Without further ado, here are ten or more things we’ve gotten up to since last you read: 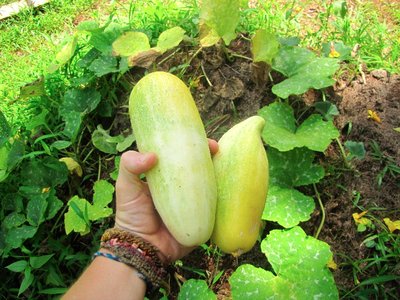 1. Expanding the Front Gardens: In the front yard, we’d built two beds that produced very well. We ate about a dozen cantaloupes from one, half a dozen watermelons from the other, and have grown the biggest hibiscus plant on the property, far bigger than its brothers and sisters. Along with these beds are some great productive, pre-existing trees: two water apple trees, a lime, and a guava that were there before, as well as a macadamia nut, several moringa trees, and another lime we planted back in February. Now, we’ve joined up everything with massive garden beds between them, in which we’ve started bean plants and sweet potatoes (both great for “fixing” soil), as well as ginger, marigolds (good for bugs), pumpkin, chard, mustard greens, collard greens, and sunflowers. Now, the “yard” part is merely paths providing access to all the garden beds.

2. The Lakeside Pizzeria: From early on, we’ve planned to build a cob pizza oven somewhere on the property. We've discovered it will have to be clay instead of cob, but we finally settled on a place and have actually started moving the project along. We’ve already built a nice herb garden to go next to the oven, as well as a potted plant garden (with an emphasis on tomatoes) on the porch next to the oven. And, using some cinderblocks already on the property, we’ve made the first moves on building the foundation on which the oven will sit. We’ve got the plans for the rest of it and will be trying to complete the project over the next month. 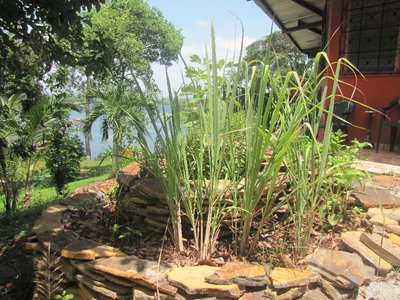 3. The Medicinal Herb Garden: We’ve converted a anemic garden bed along the rear of the house into a collection of stone-ringed medicinal herb beds, including the healthful culinary herbs we already grow in the herb spiral, as well as some very useful native plants that one of our volunteers—Thanks, Patrick!—spotted for us. The conversion is complete, but the project has much more to be done. Nevertheless, the idea seems to be working well, useful plants are growing, and the area is much more attractive to look at. (Additionally, we spruced up the companion bed on the normal yard side of the house so that it all matches. Still like things to be pretty.) 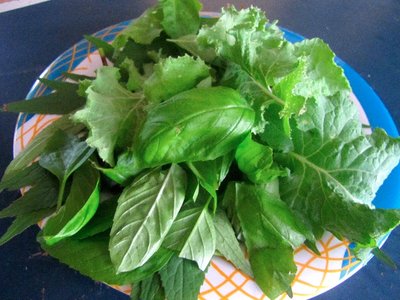 4. Getting Raw in the Kitchen: Our new friend and former volunteer, Patrick, took raw to an extreme we’ve not yet reached. He more or less ate only foraged mangoes and cucumbers, which we’ve produced in abundance, the whole time he was here. Though we are not quite this raw, we have begun to accomplish some major raw culinary feats: carrot cake, almost all of our pasta sauces (why eat them hot when they could be so much healthier?), lots of salad variations from our native leaves, and loads of dehydrated mango (still). We are officially trying to make 50% of our meals raw food (Check out the documentary Food Matters), and we can really taste the difference. Fresh stuff tastes better than cooked.

5. The Communal Hugel Monster: We’ve become quite the fans of hugelkultur, burying logs and woody debris under soil so that it feeds plants while decomposing, and we already have two in the garden gully. This month we added another up in our communal garden project. Even better, it was created using a massive compost heap that we put together on our very first day as volunteers at Glenavon back in January. The compost heap was half broken down, with great clumps of rich soil as will as already rotting longs. It created a massive hugelkultur heap in the corner of the communal garden, which should make for some great growing this fall. 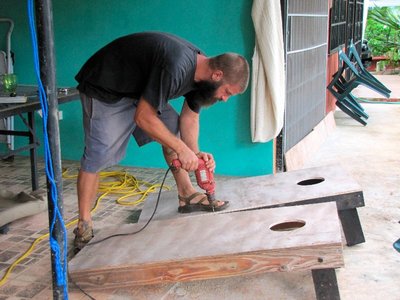 6. Possibly Panama’s First Cornhole Boards: Cornhole is a favorite pastime from our days in Guatemala. Using some of my carpentry skills learned under the tutelage of Drew, one of Earth Lodge’s owner/operators, I was able to throw together a set of cornhole boards with scrap wood one Saturday morning. Then, Emma and Grace, one of our volunteers, painted them up nicely, in the likeness of the Panamanian flag, as well as hand-sewed regulation-sized matching cornhole bags made out of jeans. I’m proud to say that I stay remain undefeated on our boards. And, I recommend making your own. 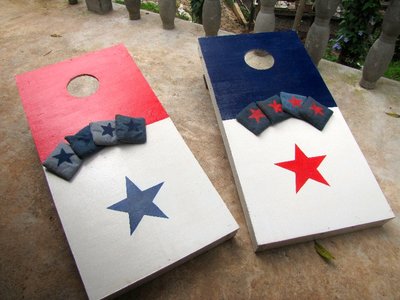 7. Dream-Catcher Tree: When we volunteered in Colombia this past spring, we noticed that Felipe, the owner of La Juanita Finca Verde, had hung a bunch of homemade dream catchers in a tree off his front porch. We decided to steal the idea. Now, we have an avocado tree donning dream-catchers made by us and some of our volunteers. Gives off a nice vibe and has inspired much more dangling art. We’ve got a few vertical gardens going now and a mobile that Emma just whipped up one afternoon. Amazing how something like that provides personality to a spot. 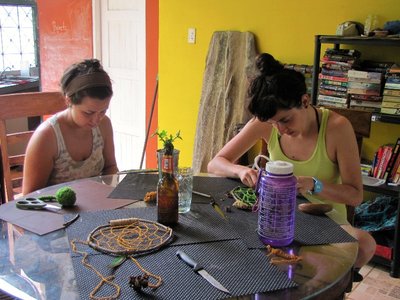 8. The Terraced Garden Beds: We are dealing with quite a lot of steep hillside here at Glenavon on the Lake. The garden gully is actually a gully. In other words, in our eyes, there’s a lot of land that’s a little harder to grow stuff on. Inspired by the idea of swales (a water catching system for gardens), our most recent volunteer, Rob, and I built a six-tiered terrace with three garden beds interspersed with three water-catching systems. It looks big time and, with a good sunny face on the hill, should be great for creating some produce very soon. 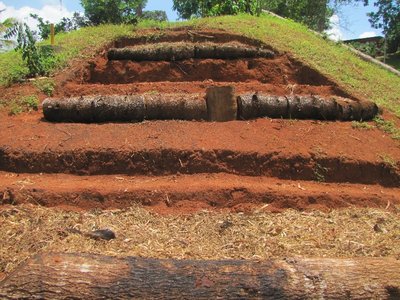 9. Trees in the Food Forest: It was a momentous occasion when we finally put some trees in our food forest. We’ve been operating on magic banana and plantain circles, expanding our jungle that way, and it looks great. (Two volunteers, Gemma and Anna, likened it to Jurassic Park, complete with humming the theme tune every day.) Anyhow, we’ve worked since April to condition the forest floor. Layer it with organic matter so that it becomes soft and nutrient-rich rather than baked clay. It seems to be working. We now have a few inches of nice compost top to plant it. So, we’ve taken some trees—grapefruit, avocado, star fruit, coconut, and lime (soon lemon and mango)— Emma started and planted them in the forest. More papaya are on the well as well. Should be a tremendous food source. 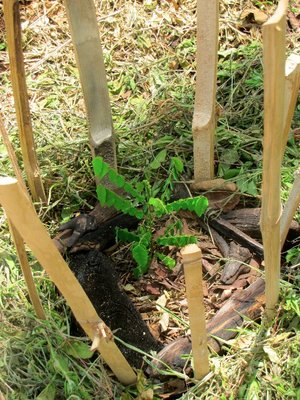 10. Discovered Discovery: One obstacle we’ve been dealing with for three months is that we had nowhere to buy any seeds. So, we were growing only what we could get from clippings or our kitchen scraps (you can grow a lot of food from the seeds in your kitchen scraps or bags of food you buy) or scavenged (such as birdseed—sunflowers—to grow actual sunflowers). However, we recently helped out a neighbor, taking her somewhere to get some soil, and she introduced us to a store called Discovery, in Panama City. There we were able to get some new stuff to try: dill, chamomile, mustard greens, collard greens, chard, arugula, catnip, spring onion, cilantro, garden beans, chives, and marjoram. We’ve got new seedlings growing all over the place.

At three months, perhaps the most inspiring thing is that ideas don’t seem to be dwindling but rather expanding, morphing into new additions and fine-tuning, sort of coloring in the lines we’ve already created. I find it hard not to walk the property daily to brainstorm what more can happen, and Emma is ever coming up with cool ideas, like the bean tipis that she and Rob put in the front food forest. To be completely honest, I sometimes ventured over to the “yard” section of the property with some permaculture thoughts as well. After a while, it just becomes impossible to look at an empty space without planning out what could happen there.